By untuk phone di Mei 19, 2011
Hooyah/Hua Air Force... - do you know that every day there are new gadgets that are created, every gadget has its own way to use it, in blogs Review All Gadget we are reviewing gadgets from various brands ranging from spec, price and how to use the feature, now we are discussing iformasi that you are looking for Hooyah/Hua Air Force... this information we collect from many reliable sources so that complete for you. please see.

"People break down into two groups when the experience something lucky. Group number one sees it as more than luck, more than coincidence. They see it as a sign, evidence, that there is someone up there, watching out for them. Group number two sees it as just pure luck. Just a happy turn of chance. ........See what you have to ask yourself is what kind of person are you? Are you the kind that sees signs, sees miracles? Or do you believe that people just get lucky? Or, look at the question this way: Is it possible that there are no coincidences?"-Graham Hess (Mel Gibson), Signs.

I watched some chunks of the movie signs last weekend and it got me thinking about "coincidences" and how I don't believe they exist. I can think of a great many examples to illustrate that from within my personal experience, that but I am thinking one thing in particular today.
It involves me. And a particular guy in the Air Force.
Ever since I was...about 10...I've had an inexplicable obsession with the military. For years I wore camouflage and tshirts reading ARMY, MARINES, etc. My entire wardrobe was shades of green, with a spattering of black and brown. I thought being a Marine might be a good idea. (Yes, I was a complete weirdo. Not the point of this post). The first watch I ever remember having I set to military time and have run on that ever since. When I go somewhere overnight my clothes get packed in a ruck. I've never been to a Army Navy store I didn't like. I own so much military related stuff it is just ridiculous... I could go on and on here...
This obsession carried on for years. I've stopped wearing camouflage everywhere (now I dress like...you know...a girl), but I still run on military time and other weird things like that.
I have no idea where this obsession came from. I didn't really know anyone in the military. Never grew up with that sort of lifestyle or anything. It just was an obsession that seemingly came from no where.
But now, a good 10 years later it is all making a little more sense to me. And I don't think it was a coincidence. At all. 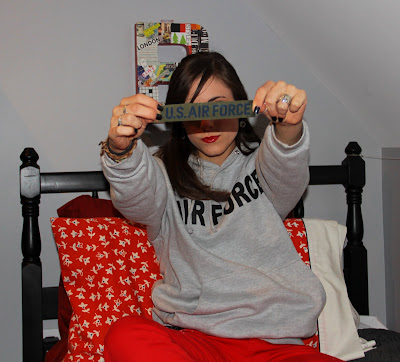 I've known JoJo for almost 4 years. For about 2 and a half of them he had no interest in anything but civilian life. Then out of the blue (literally) one day he mentioned that he felt that God wanted him to join the Air Force. I didn't actually believe him, because that was so unlike him to say such a thing. I honestly thought he was kidding.
But he did join the Air Force. And I know it was God. Because there is no other explanation that would make sense.

Anyway, he left for Basic Training back in August. Somewhere in there I became the proud Air Force girlfriend. And I think I enjoy this more than an average chick would. I'm so proud of him. I am so proud, despite that fact that long distance is hard, painful, and rough, that he is in the military. I think it is so incredibly cool.

AND I really, really like that I now have an excuse  a reason to go into Army Navy stores and buy stuff.
Like my new favorite hoodie that I bought on Saturday from a local store called "Army Barracks." 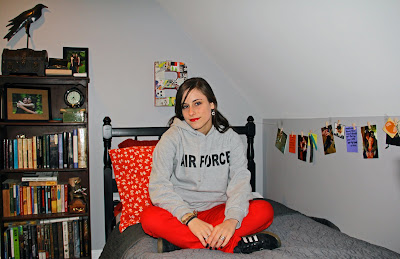 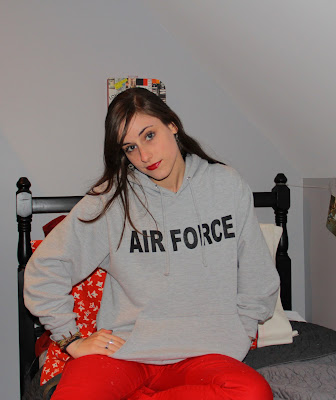 It is awesome. And while it is not all that fabulous looking, it is incredibly comfortable.(and it matches my room. Seriously? Destiny.)

A text sent to the Airman the day I took these pictures read: "...what would you think if I wore this hoodie everydayfortherestofmylifealways? I might. I love it. And it looks good with my red skinny pants. What more could I want? :p "

Does that sound like a coincidence to you? No. Me neither.


*hooyah is technically a navy thing. long story. just go with it. or insert your own favorite military war cry.