The tech industry is famous for forgetting its own history.  We're so focused on what's next that we often forget what came before.  Sometimes that's useful, because we're not held back by old assumptions.  But sometimes it's harmful, when we repeat over and over and over and over the mistakes that have already been made by previous generations of innovators.

In the spirit of preventing those repeated failures, I spent time researching some of the biggest, but most forgotten, failures in technology history.  I was shocked by how much we've forgotten -- and by how much we can learn from our own past.

Video console manufacturer Atari was notorious for its boom and bust growth in the 1980s.  The company's best-known failure was probably the game cartridge ET the Extraterrestrial, which Atari over-ordered massively in anticipation of hot Christmas sales that never materialized.  Legend says that truckloads of ET cartridges were secretly crushed and buried in a New Mexico landfill.

What's much less well known is that Atari was also involved in the creation of an early motion-controller for home videogames, a predecessor of Microsoft's Kinect.  Since video detection technology was not sufficiently advanced at the time, the Suitmaster motion controller consisted of a bodysuit with 38 relays sewn into the lining at the joints, plus 20 mercury switches for sensing changes in position.  The suit was to be bundled with the home cartridge version of Krull, a videogame based on the science fiction movie of the same name.

A massive copromotion was arranged with the producers of Krull, and Atari made a huge advance purchase of Suitmaster bodysuits and cartridges.  Unfortunately, development was rushed, and late testing revealed two difficulties.  The first was that the suit's electromechanical components consumed about 200 watts of power, much of which was dissipated as heat.  That may not sound like much, but imagine jamming two incandescent light bulbs under your armpits and you'll get the picture.  There were also allegedly several unfortunate incidents involving mercury leaks from broken switches, but the resulting lawsuits were settled out of court and the records were sealed, so the reports cannot be verified.

The Christmas promotion was canceled, but Atari didn't give up on the Suitmaster immediately.  The next year, it was repurposed as a coin-op game accessory, allowing the user to control a game of Dig Dug through gestures.  Sadly, Atari's rushed development caught up with it again.  Due to a programming error in the port to Dig Dug, under certain obscure circumstances when Dig Dug got flamed by a Fygar the suit would electrocute the player.  (The bug was discovered by an arcade operator trying out the game after hours, in what is now memorialized in coin-op gaming circles as The Paramus Incident).  That was the last straw for Atari's corporate parent, Warner Communications.  To limit its potential liability if a Suitmaster were to fall into public hands, Warner arranged to have the entire inventory chopped up and mixed into concrete poured into a sub-basement of the Sears Tower in Chicago, which was then undergoing renovation.   A small bronze plaque in the third sub-basement of the Sears Tower is the Suitmaster's only memorial:

Before Facebook, before MySpace, even before Friendster, the most successful social networking site on the web was eSocial.  Largely forgotten today, eSocial thrived in the late 1990s as usage of web browsers took off on PCs.  By 1998, it had reached more than 50 million users worldwide, an unheard-of success at the time.  Its Series A fundraising in 1999 raised more than $132 million from a consortium of VCs led by Sequoia Capital.  Many people still cite eSocial's Super Bowl ad in January 2000, which featured a singing yak puppet, as a classic of the dot-com bubble era.  When the company went IPO in February 2000, its stock price made it the 23rd most valuable company in North America.

Unfortunately, just two months later, it was revealed that 99.999974% of eSocial's registered users were fake people simulated algorithmically by a rogue eSocial programmer.  The other 13 were middle school students from Connecticut who were technically too young to sign up for the service.  eSocial was sued for allowing underage users, which delayed critical service upgrades for several months.  By the time the litigation was resolved, Friendster had seized the initiative, and eSocial was quickly forgotten.

eSocial found a second life overseas, though, and today it is still the leading social site in several former Soviet republics in Central Asia.  The founders of eSocial have long since left the company, and today are active in Wikidoctor.org, a promising new site that enables people to crowdsource the diagnosis of diseases and other chronic health problems.

It's an unfortunate fact that wartime is a great stimulator of innovation.  Desperation leads countries to try all sorts of crazy ideas.  The successful ones become famous, while the failures are usually forgotten.   For example, you don't hear much today about Britain's World War II plan to turn icebergs into aircraft carriers (link).

Even more obscure was the effort to create an aircraft from cardboard.  One of the greatest bottlenecks in aircraft construction during the war was the shortage of aluminum feedstock.  Britain could not expand aluminum production quickly enough to meet its needs, so it attempted to substitute the output from the Empire's massive Canadian paper mills.  The idea of a cardboard airplane sounds crazy at first, but cardboard can be incredibly rigid in some directions (as you've found if you've ever tried to smash a box for recycling).  Through the proper use of corrugation in multiple directions, the British found that they could create a material with the same tensile characteristics as aluminum, with only slightly greater weight.

Early flight tests of the cardboard aircraft were not encouraging, as the first two test planes broke up suddenly in mid-flight.  Subsequent investigation revealed that water was infiltrating the corrugations, and then freezing when the plane reached altitude.  The expansion of the ice caused the cardboard to delaminate, resulting in failure of the airframe.

But the engineers persevered, sealing the cardboard with paraffin wax to waterproof it.  These new models successfully completed flight tests in the UK, and were demonstrated for Winston Churchill in 1943, who endorsed them enthusiastically.

The new aircraft were deployed to North Africa, where another unfortunate problem appeared: the paraffin melted in the desert heat, causing the planes to wilt on the tarmac.  Needless to say, this limited their effectiveness.  The British engineers persevered, eventually creating a new waterproofing scheme utilizing used cooking oil.  This not only waterproofed the planes, but also made them smell like fish & chips, a definite plus to homesick British airmen.  Unfortunately, wartime supplies of cooking oil in Britain were limited, and by the time alternate supplies could be imported from the America South, the war was nearly over.

The cardboard airplane disappeared into history, but its spirit lives on (link).

The 1950s and 1960s were the golden age of innovation in electronics.  Companies like HP, Varian, and Raytheon created amazing new devices, often adapted from wartime technologies.  One example was the microwave oven, which was derived from radar.

But microwaves were once used for a lot more than cooking food.  My dad worked in the electronics industry at the time, and he often told me stories about the remarkable new product ideas he worked on.  One was the microwave hairdryer.

Today we're frightened of microwaves because they're "radiation," and that's assumed to be bad.  But in the 1960s people understood that microwaves had nothing to do with nuclear radiation.  They were just another tool that you could use to get things done, like arsenic or high voltage electronics.  Engineers at my dad's employer (which he asked me not to name) were looking for new ways to use microwaves to solve everyday problems.  Someone noted the number of hours women spent under rigid-hood hairdryers, used to finish the elaborate hairdos that were prevalent in the 1960s, and realized that a microwave hairdrying helmet could do the same job in just 45 seconds -- creating a massive increase in national productivity.

Unfortunately, the microwave hairdryer ran into a series of technical problems.  The first was that the microwaves caused metal bobby pins and hair clips to arc, which frightened customers and gave their hair an unattractive burned smell.  That was solved by substituting plastic clips.  The second problem was that the microwave frequency that couples best with wet hair is very close to the frequency that couples best with blood plasma.  This required some precise adjustments to the three-foot-long Klystron tubes that powered the hairdryers.  If they were jostled there was a very slight risk of causing the client's blood to boil (although this never actually happened in practice).

The technical problems were eventually resolved, but the death knell to the microwave hairdryer was something no engineer could fix: a sudden change in hairstyles in the late 1960s.  The move toward long straight hair, frequently unwashed among younger people, caused a collapse in the hairdryer market, from which it has never recovered.

There was an abortive attempt to create a microwave blow dryer in the 1970s, but it was pulled from the market when it caused LED watches to burst into flame.

During the Dark Years when Steve Jobs was away, a rudderless and confused Apple Computer churned out a long series of failed initiatives.  Their names echo faintly in tech industry history:  CyberDog, Taligent, Kaleida, OpenDoc, HyperCard, Pippin, eWorld, emate, A/UX, the 20th Anniversary Macintosh, Macintosh Portable, QuickTake, the G4 Cube (oh, wait, Steve did that one), Newton, and so on.

But the most catastrophic failure was the one Apple worked hardest to hush up, the project called Gravenstein.  Simply put, Gravenstein was Apple's secret project to produce an electric automobile.

In the late 1980s, Apple was growing like a weed, but the driver of its growth was the Macintosh product line initiated under Steve Jobs.  John Sculley and the rest of Apple's senior management team were concerned with securing their historical legacy by doing something completely different.  Sculley, noting the chaos caused in the world economy by the oil embargo of the 1970s, chose to focus on the creation of an all-electric car.  Michael Spindler, ironically nicknamed "Diesel," was chosen to manage the production of the vehicle.  Bob Brunner drove the overall design, but Jean-Louis Gassee was asked to do the interior, on account of he's French and has good taste.

Apple used its Cray supercomputer to craft a unique teardrop aerodynamic shape for the car.  Apple purchased all the needed parts, and planned to begin production in its Fremont, California factory.  To prepare the market for the car, Sculley started working automobile references into Apple's advertising.  The most famous of these was the "Helocar" advertisement (link).   If you watch the ad closely, you can see actual diagrams of the Gravenstein's design and aerodynamic shape, although of course the first version of the car was not intended to fly.

Unfortunately, the public response to the Helocar ad was so overwhelmingly negative that it frightened Apple's Board of Directors.  Sculley was ordered to scrap the Gravenstein project, and all documents related to it were shredded and then burned.  Although Gravenstein never came to market, its legacy affected Apple's products for decades to come.  The Macintosh Portable, for example, used bulky lead-acid batteries that were originally intended to power Gravenstein.  And many years later, Jonathan Ive reused the Helocar's aerodynamic shape in the design of the original iMac. 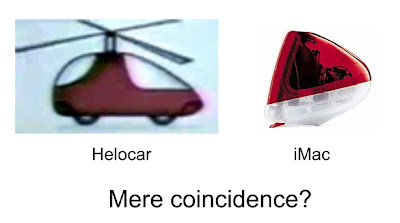 Those are my five top little-known tech failures of all time.  What are yours?  There are many other candidates.  Honorable mentions should include Leonardo da Vinci's steam-powered snail killer, Thomas Alva Edison's notorious electric bunion trimmer, http://almourasiloun2.blogspot.com /2007/03/early-look-at-ultimate-social.html">spitr.com, and of course Microsoft Bob.

You can draw many lessons from these failures, but to me the most important lesson of all is that you can't trust blog posts written on this particular date.